The structural headwinds in the chemicals industry are blowing like a gale out of the global economy. In a funk since peaking in 2007, global economies have been unable to reach the 35-year GDP growth average of 3.5 percent in six of the past eight years. And the two years of “high” growth were more of a bounce back from the sharp downturn of 2009 than precursors of a sustained turnaround.

Within this problematic macroeconomic environment, made worse for many multinationals by the strong dollar, demand for chemicals has fallen. Overall industry sales growth increased an anemic 2.1 percent in 2016 as the sector faced declining industrial production and broad inventory rightsizing by many of its customers. Chemicals companies that sell petroleum-based products often fell short of these industry averages because lower oil prices led to sharp top-line declines, sometimes in the range of 30 to 40 percent. Only naphtha-based producers benefited from oil price weakness, because it translated into materials cost reductions of about 60 percent for some companies, which greatly improved profit margins.

The view ahead in global markets

As to the outlook for the industry for the next year or so, expect more of the same or even a bit worse for companies that are unwilling to take steps to address the continuing uncertainty in major markets — and that sidestep the need to change the status quo. In 2017, barring a recession in the U.S. and Europe or a slowdown in China, Moody’s Investor Service expects EBITDA in the chemicals industry to slip by 1 or 2 percent year-over-year.

Breaking this down by market, in the U.S., the new administration is likely to embrace policies that are antithetical to free trade and globalization as well as to reduce regulations on businesses. To a degree, this could increase demand for chemicals by stimulating domestic manufacturing investment. But the other side of the coin is more problematic for chemicals companies: If the U.S. impacts trade flows, producers that depend on access to international markets or that plan to make resource investments outside the U.S. could be harmed.

In the Eurozone and the United Kingdom, monetary easing has not translated into significant growth or demand gains for chemicals companies. Moreover, the economic, political, and legal questions brought on by Brexit cloud the economic outlook in the U.K. and could put a damper on industrial manufacturing activity. Key elections in France, Italy, and Germany, which may move these countries toward more protectionist and insular biases — similar to the U.S. — could have a strong effect on whether chemicals companies can collaborate and grow within the European Union.

The Middle East is in the throes of a fundamental economic restructuring; low oil prices have frightened countries in the region into at least giving lip service to reducing dependence on revenue from fossil fuels and diversifying their economies. That, in fact, is the impetus behind Saudi Vision 2030, a far-reaching program that aims to, among other things, increase Saudi Arabia’s nonoil exports as a share of GDP to 50 percent from 16 percent today. This plan and similar ones being developed in the Middle East encourage more local production of consumer and business goods for both domestic and export markets. Thus, chemicals companies will need to figure out how they can participate in the Middle East by supporting and facilitating the region’s diversification and localization aspirations.

Asia, and more specifically China with its GDP growth of 6 percent (almost double that of the rest of the world), remains a bright spot in the chemicals firmament. But in China, too, a tectonic shift is under way as its economy moves from being export driven to one based on domestic consumption. Margin pressures are increasing among domestic chemicals producers due to an overcapacity in basic commodities and in certain value chains (such as acrylonitrile-butadiene-styrene [ABS], a popular plastic used in manufacturing, and purified terephthalic acid [PTA], a polyester) as well as inefficient plants and processes. Moreover, a 6 percent growth rate in China represents a significant drop from a few years ago and heralds a slowdown in chemicals industry end markets, including automotive, construction, and pharmaceuticals, that enjoyed heady double-digit expansion for years. 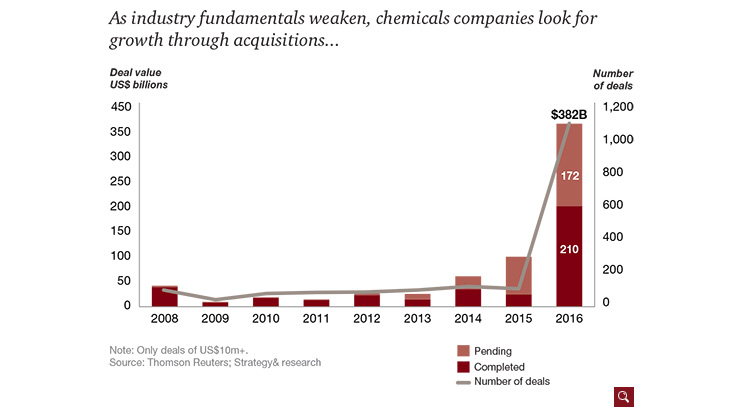 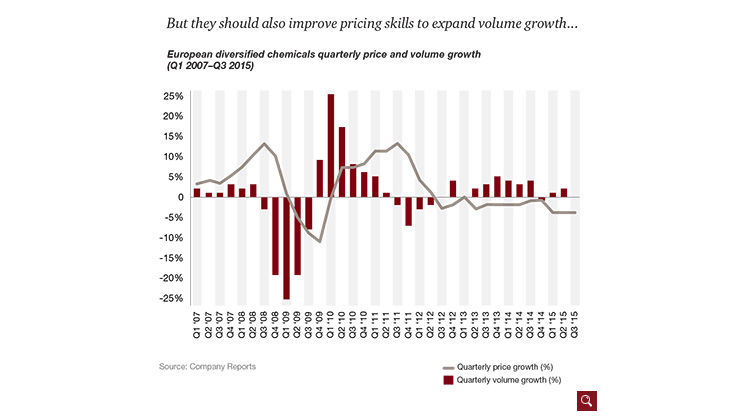 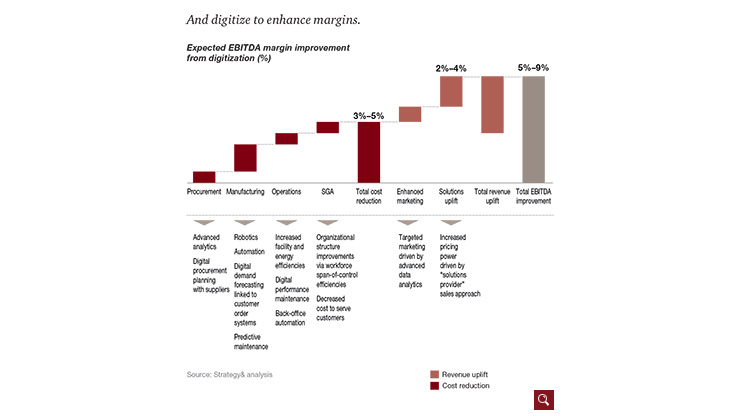 The results of the past few years and the unstable landscape ahead for the chemicals industry are indicative of a new normal: a significantly altered industry that is marked by a hyper-competitive environment in which companies must vie for profitable growth in global markets that each have their own significant shortcomings and that offer little support.

In this situation, a zero-sum game is all that exists. The coming years will be decisive in determining market share for many established chemicals players. To emerge from this cauldron as an industry leader, chemicals companies should prioritize three strategic activities, described below.

With rare exceptions, chemicals companies can no longer depend on volume to drive growth. Structural weakness in most markets and recycling and reuse, which impact the sale of virgin materials, are combining to substantially reduce demand. Pockets of potential growth exist in new materials, such as biopolymers, which are renewable polymers produced by living organisms, but they are still some time away from reaching scale. Consequently, with demand at a premium, chemicals companies need to extract increased value from other parts of their operations to improve performance.

There are a number of ways to do this. Companies can revamp their customer offerings, providing, for instance, differentiated service levels with a tiered fee structure, and they can implement sales training and systems that improve sales-force efficiency and results. But one approach that companies often overlook could actually have the greatest impact in driving short-term value-capture benefits: pricing excellence, which involves being able to base prices and transaction rules on a logical connection to production and sales costs and then monitoring and adjusting prices depending on the results they produce.

A comprehensive pricing excellence capability requires competitive intelligence, robust customer segmentation, and supporting IT infrastructure capable of delivering the data and insight needed to set and adjust prices. Pricing excellence lets companies address pricing from the strategic level (e.g., is there a supply–demand imbalance that can be exploited?) down to the transactional level (e.g., what discount will maximize profit while preserving value?).

Pricing excellence is not an insignificant or easy undertaking, but it can rapidly improve profitability. We’ve found that pricing excellence initiatives can drop 2 to 5 percent of revenue directly to the bottom line.

A recent PwC study found that chemicals companies plan to invest 5 percent of annual revenue on digitization over the next five years — and nearly a third of them reported having already reached an advanced level of digitization. These initiatives can produce near-term benefits across three primary business dimensions: operations, customer-facing, and organizational.

In operations, the application of digital technologies to functions such as maintenance is already improving plant and network performance and minimizing downtime, reducing operating costs by 2 to 10 percent. But there are greater savings to be had. By using digitization to integrate business and manufacturing systems, optimize production footprints, and redesign processes, chemicals companies can capture gains of up to 25 percent in capacity utilization.

Chemicals companies have long struggled to make the shift from “product sellers” to “solution providers” in the customer-facing aspect of their business. Digitization can make a big difference in this regard. For example, with an application in the paper chemicals segment, suppliers are using sensors and other digital technologies to track how their products are integrated into their customers’ operations; in turn, this enables the chemicals companies to improve their products on the basis of utilization patterns and enhance their ability to proactively address customer needs. Among the results for chemicals firms are stickier customer relationships, a greater share of customer budgets, and the potential for increased revenue based on provable performance metrics.

And advances in machine learning offer chemicals companies a valuable opportunity to do more with fewer people and effectively lower the cost of running the business. Moreover, greater processing power and decision-support systems enabled by artificial intelligence can help reduce organization layers and create a more efficient and potentially innovative operation by, in essence, removing traditional centralized spans of management hierarchy and replacing them with more localized control.

Faced with stagnating demand and profitability, some chemicals companies have tried to strengthen their position through mergers and acquisitions, hoping to purchase product lines that complement their existing offerings or allow them to move into potentially lucrative areas aligning with the business’s strategic goals. In 2016, nearly 1,200 deals valued at more than US$380 billion were announced, including blockbusters such as Bayer/Monsanto and Dow/DuPont, both of which are still pending.

Companies that completed transactions during this M&A binge will need to deliver on the cost and revenue synergies they promised and validate their deal rationales. Meanwhile, companies that waited on the sidelines will have to prove to shareholders that they possess focused, coherent portfolios and a way to squeeze more value out of them — or take concrete steps to demonstrate that they have a plan for improving shareholder gains that involves rightsizing the portfolio. Making acquisitions in existing segments may not be a viable approach, given the already highly consolidated nature of many markets. Growing into adjacent markets also may prove prohibitive given current multiples (recent acquisitions of Chemtura, Monsanto, Chemetall, Air Products, and Syngenta yielded an average EBITDA multiple of 14.7x); limited companies to target; and the risk of failing to accurately identify adjacent markets and, hence, damaging portfolio coherence despite management’s best intentions.

Given these obstacles, divesting or spinning off selected businesses may be the most feasible and profitable avenue, especially because diversified chemicals companies often suffer a conglomerate discount in the market. The 160-year-old W.R. Grace took this route last year, when it split into two separate — more focused — public companies. One, called W.R. Grace, includes the catalysts and materials technologies businesses, and the other, GCP Applied Technologies, is responsible for construction and packaging products. This action unlocked about $1 billion in shareholder value, according to market returns.

Uncertainty is certainly the new normal in the chemicals industry. And although the sector has historically swung like a pendulum between good times and bad, it no longer appears likely it will return to robust profitability on the wings of a new, innovative product segment or the unexpected opening of a new market. It has been decades since either of those scenarios played out. There are, however, strategic steps that chemicals companies can take to at least open doors to profitable growth, including value capture, digitization, and smarter portfolio management. But given the unsettled conditions in the industry, they can’t afford to delay in playing their best hands.